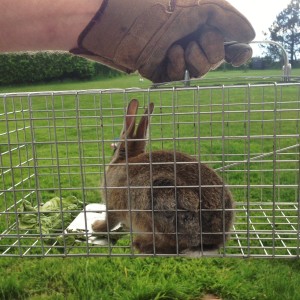 Every year we try to plant out some vegetables in our beds. However unlike other years, this summer we had a big problem in our garden. Rabbits!! Yes, they’re really cute and lovely to look at but after you see 12 bunnies demolishing any new vegetables coming through, they quickly lose their appeal! After numerous conversations with the kids on how to deal with them, we (they) decided that we need a live trap so that we could catch them and re-release them many many miles away.

It worked but it was painfully slow. When we caught one, the kids loved trundling off in the car with the rabbit in the trap in the boot of the car looking for a new home.

Anyway, needless to say the remaining rabbits eventually moved on to bother someone else and we were left with very pathetic vegetable beds. Months on and the kids decided to clear them off the weeds (I didn’t even have to ask them) and subsequently found some goodies that had managed to avoid those pesky bunnies. They were so excited digging, they found lots of carrots and radishes and were really chuffed with themselves.

We’ve just got a puppy (bleary eyed blog post to follow!) and we’re hoping that he’ll act as a deterrent to any rabbits that dare to move in next year. We’re hoping for a more plentiful harvest next year, unless the dog digs everything up first!

Make sure this account has posts available on instagram.com.