A typical week in dinners (Linky)

Sinéad from Bumble’s of Rice invited us to take part in her ‘A Week in Dinners’ linky so we kept note of what we had for dinner for a week and took photos (when we remembered). The idea behind this is to get a glimpse into what real families eat during the week, not just the beautiful posts and images we share online.

I’ve been trying to save money (January is a long month!) and use what’s in my freezer so I took out a pack of Lidl free-range chicken breasts on Sunday morning and that evening after dinner, I got the kids to chop up the onion and peppers and I chucked (culinary technical term) them into a big bowl with the chopped chicken, some olive oil and some seasoning (ground cumin and cayenne chilli powder). Covered the bowl and left it to marinade for dinner on Monday. I’m not often that organised but we’d been in town on Saturday and popped into Tesco and bought some guacamole and fresh salsa (I can’t really get it anywhere else). It meant that the fajitas were ready to cook. Just needed to pop a couple of packs of tortilla wraps into the oven to warm and dinner was ready!

Now this was a mistake, not because it wasn’t nice but because it took me so long to make! My eldest was having her best friend around for a few hours after school and it’s her favourite so it was a special request. I gave in and promised my daughter only to discover that there wasn’t any homemade bolognese sauce in the freezer (you see, I definitely do need to do a stock take) so I had to make that first. It’s a long process, but worth it in the end. Luckily I was home from work at lunchtime so a quick trip to the butcher on the way home to pick up the meat and I got it going so it would be ready by the time I got back from school pickup. I got the two older girls to assemble the lasagne so I at least had a chance to wash everything up before it went in the oven. 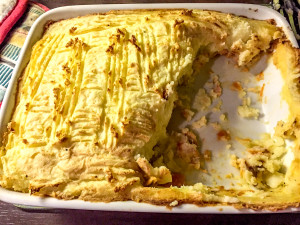 Yet again, a rummage through my freezer turned up some a couple of packets of seafood mix and I had some potatoes that needed using up before they started sprouting, so I thought a fish pie might be nice. I also feel guilty that we don’t have enough fish so this would make me feel better as well as helping to use up what’s already in the house. I tried a new recipe, a Jamie Oliver one. It seemed easy enough but I was disappointed with the outcome. It was too dry and needed much more liquid, I can see why he suggested serving it with baked beans! 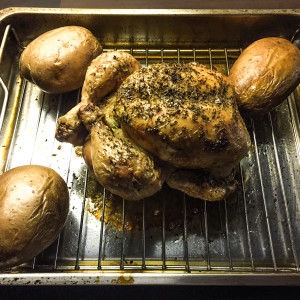 Now the only reason we had this is because I wanted the leftover cooked chicken for our pizzas on pizza night. It’s actually one of the easiest things to make which is a good thing because Thursday is one of our busy after school activities evenings. I didn’t need gravy so just bunged (yet another culinary technical term) it onto a tray and after half an hour sat some large roosters around it (for jacket potatoes). When it was cooked, we had it with baked beans (my husband was away, he really doesn’t like beans!).

Friday – Out for dinner at friend’s house 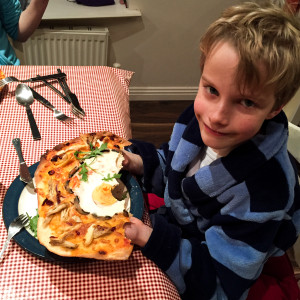 My favourite night of the week, because it’s homemade pizza night. My husband and kids make the most amazing pizza dough on a Saturday afternoon which makes the most amazing pizzas! They always make double the quantity and freeze the remaining dough so it’s one week on and one week off. We try to vary the toppings, this week we had chicken (leftover from Thursday), mushrooms and dried cranberries (found in the cupboard after Christmas). Our youngest boy decided to put an egg on his and loved it.With a handful of rocket thrown onto it after it’s cooked and a glass (or two) of Valpolicella, it’s the perfect meal I think. 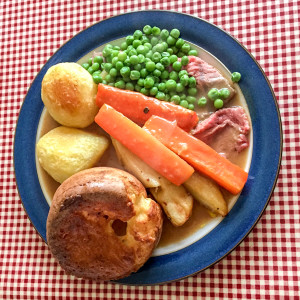 It was my Mum’s birthday so we invited them around for Sunday lunch. There was a special on housekeeper’s cut of beef in my local Centra so we had that with all the trimmings. We’ve had Yorkshire Puddings with the meal before, we usually have it before the main course but we tried it but I think it was too much on the plate at once.

That was pretty much a typical week of food in the Woodward household. I’m sorry about the quality of the photos but they were often taken at the last minute with my iPhone, if they were ever taken at all!

Are you looking for a unique staycation experience

A short drive from Grange, #Sligo is the glorious

We’re lucky enough to call Sligo home and this c