Family Days Out In Tuscany

When you’re visiting Tuscany, there’s a real temptation to stay put and enjoy the sunshine and facilities on your campsite or at your villa however, I would recommend that you pack a bag with some sunscreen, water and snacks and head out exploring this interesting and historical part of Italy.

Here’s a list of places we visited while we were in Tuscany that we would recommend every family check out.

If you’re in any way close to this city, you must must must visit Florence. It is honestly one of the most beautiful cities I have ever been to. We spent three days there last year and loved every minute of it. You can read all about our time in Florence and how much fun we had taking in the sights and learning all the history of this city here.

This city was always on my bucket list so we made the effort to go on a day trip there while we were staying in San Vincenzo with Canvas Holidays. It took us about 1hr40mins from Parc Albatros but it was well worth the drive.

We had googled the parking situation before we left and found a car park outside the walls called San Francesco was a popular choice with visitors to Siena. It’s so popular though, it can be hard to find a space and we turned up at around 11:30 and there was only one of two spaces left. A quick walk across the road, up a very long escalator straight into the old part of Siena. Within a couple of minutes, we were in Piazza del Campo which famously hosts the Siena Palio every year, one of Italy’s most famous sporting event. The famous horse races in honour of the Virgin Mary take place on July 2 and August 16 and attract thousands of visitors to Siena. 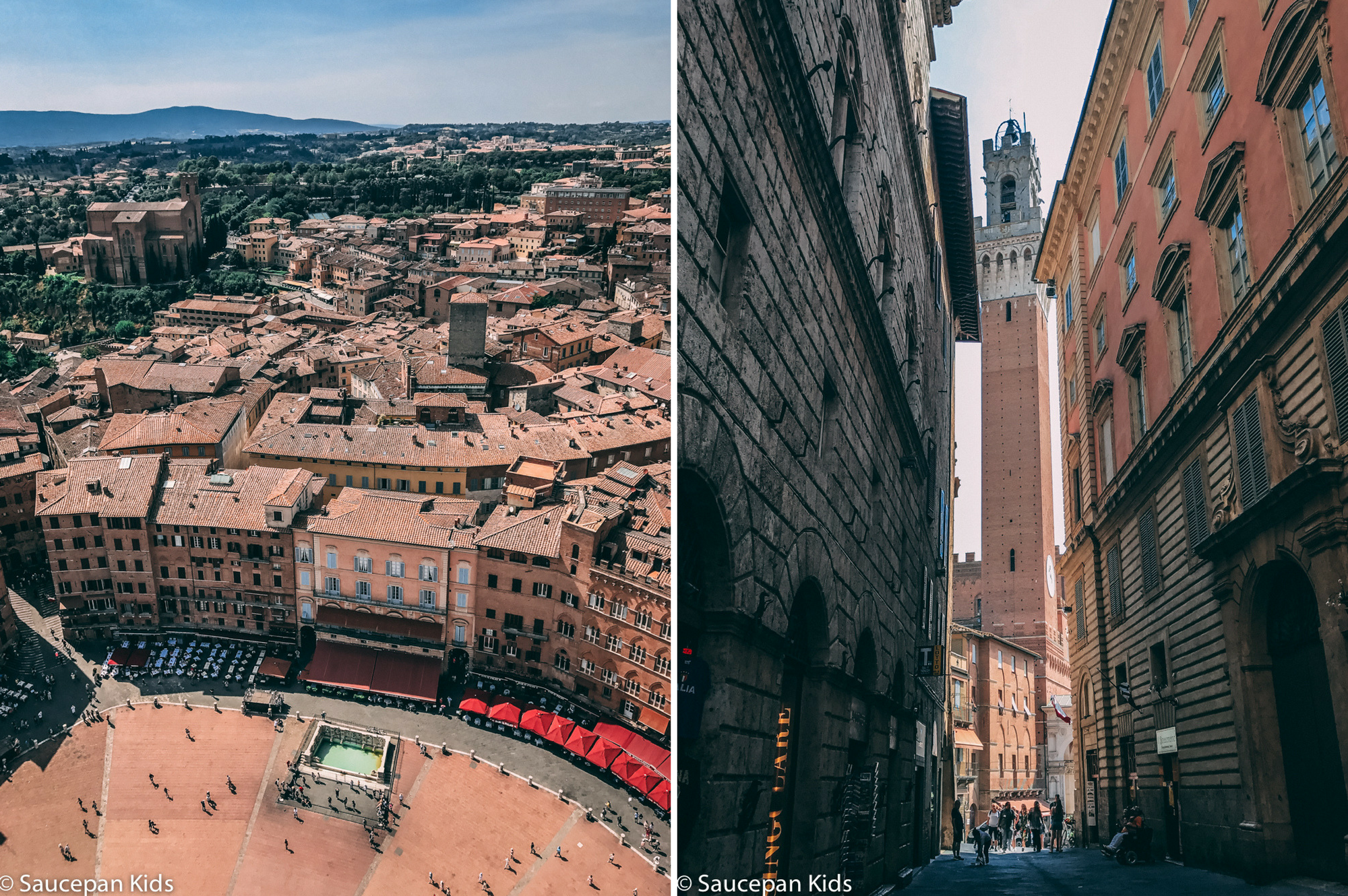 In the centre of the Piazza, it’s worth noting that just by the fountain there you can fill your bottle with fresh water which was something we hadn’t seen since Rome. We went into Palazzo Pubblico and bought a family ticket (€25) to climb the Tower of Mangia. The tower is the third largest in Italy. We had to queue to climb the tower though as only 25 people are allowed to climb it at any one time because the staircase is incredibly narrow. 450 steps later, we had the most incredible view over Sienna and importantly we could see the the white and greenish black stripes of the Duomo close by.

We then headed to the Duomo to see how it compared to the Duomo in Florence. We queued (in the shade luckily) to buy a ticket to enter the Duomo which was way ore complicated that you would think. There are loads of different ticket combinations you can buy, in fact they have people walking up and down the queue trying to explain all the options. We decided to just visit the Duomo which cost €4 per person (kids under 12 are €1). 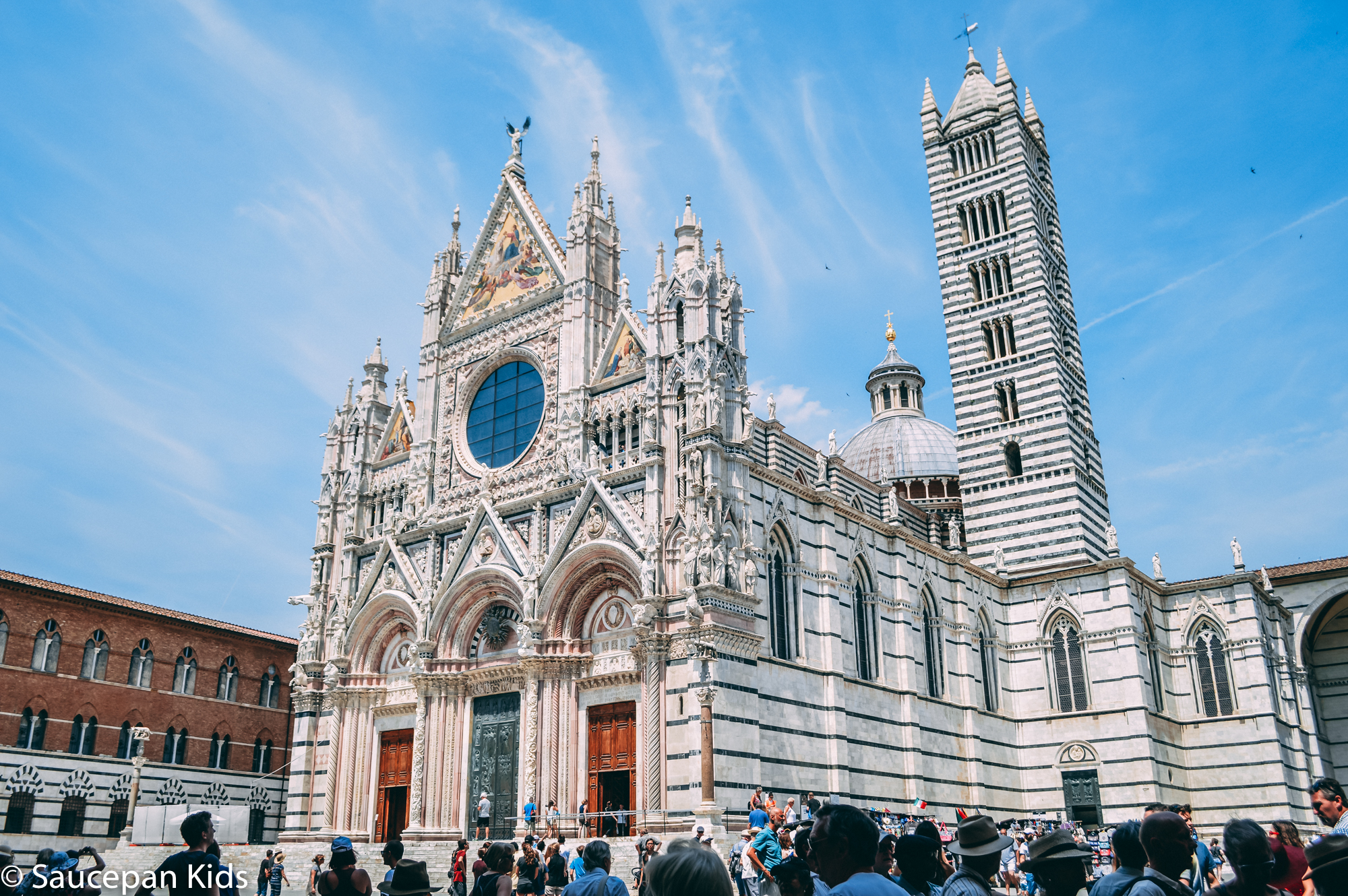 Once inside the Duomo, you could see what the fuss was about. The floor of Siena’s Cathedral is in fact one of the most incredible works of art of all time, a spectacular inlaid marble mosaic floor. The floor is so precious, it’s normally covered up to protect it from the visitors’ shoes. However the floor is exposed from June 29 to July 31 and from August 18 to October 26. Those days, entrance increases to €7 per person. The girls and I were able to enter the Cathedral in sleeveless t-shirts and shorts however if we wanted to enter the crypt,  we had to cover up with a paper sheet that was kindly provided free of charge.

We grabbed a quick slice of pizza each as we walked away from the Duomo, lured in by the price, €2.50 for a large slice of margherita (advertised in the window) only to find that you paid an extra €2 for a couple of slices of onion or peppers on top. That’ll be a tourist tax I imagine!

Siena is well worth a visit but be prepared, have lots of water, bring snacks (to keep the kids going) and be prepared to queue. 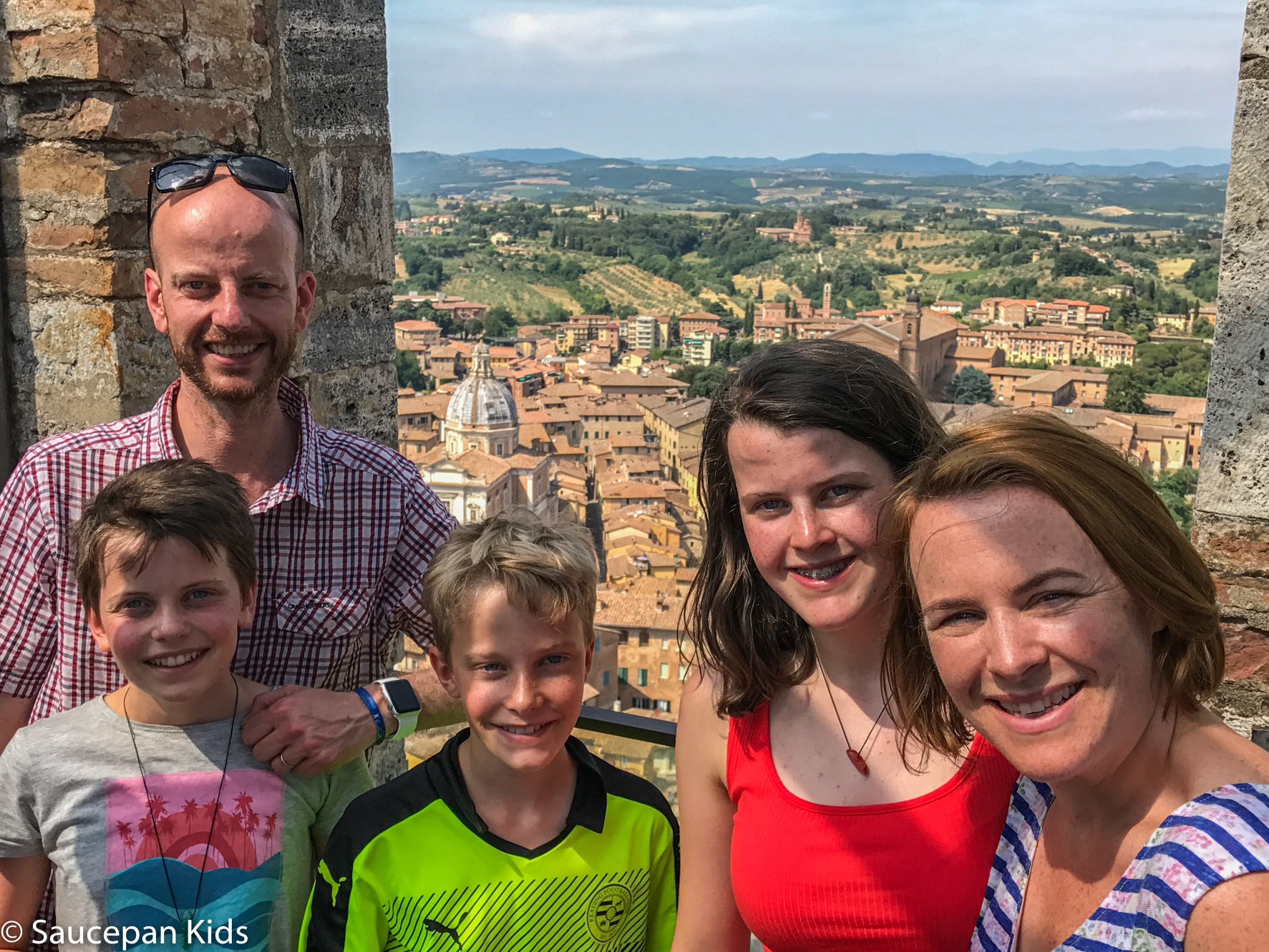 Located about two hours from Florence, we stopped at this hilltop town on our way from Camaorie to San Vincenzo. It had been recommended to us by fellow blogger Sinead – Bumbles of Rice.

Volterra is famous for it’s Etruscans origins in fact the Etruscan walls that surround the centre are still visible today. 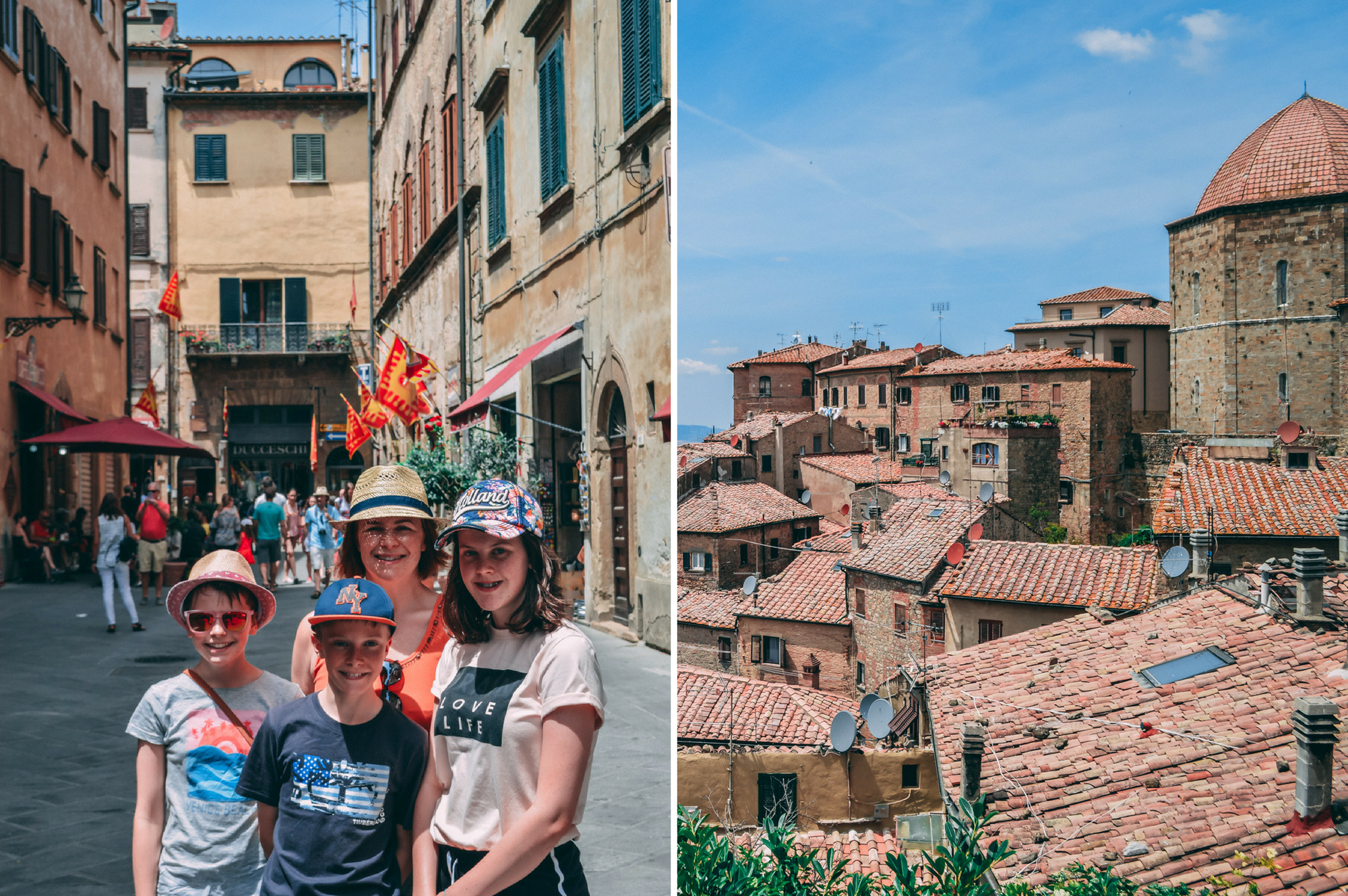 It’s a walled town so the advice would be to park outside in the paid parking (lined blue) on the streets around the outside.

We stopped off for an espresso and gelato in a gorgeous street cafe/gelataria which surprisingly didn’t have a copperto (cover) charge. We’ve been stung by that cover charge before. We then wandered to Volterra’s main square Piazza dei Priori and found that there was an exhibition there for the famous architect Frank Lloyd Wright so we had to pay a visit as Anna (architect wannabe) was familiar with his work when she attended a CTY summer camp on Architecture back in Sligo last year.

As we wandered through the town, we came upon the most breathtaking view of the Tuscan countryside and sat on a wall and ate our picnic lunch which we had brought with us from the campsite. After picking up our traditional fridge magnet made of marble of course, we headed out of Volterra so pleased that we had visited this beautiful Italian town.

Nicknamed the city of 100 churches, we knew that this famous walled city had a ZTL (Zona Iraffico Limitato) which we wanted to avoid so we parked on the street outside the wall and walked in through the 16th century walls ourselves. We only had a few hours to spend in Lucca but someone had suggested that it’s fun to hire bikes and cycle the 4 kilometres of walls that surround the city but that would have to wait for our next visit.

We first headed to the popular Piazza dell’Anfiteatro which we had read about and seen on an episode of Top Gear! We could see why it was named the Amphitheatre Square and that’s exactly what it is. It has an unusual oval shape built on the site of a Roman Amphiteatre. 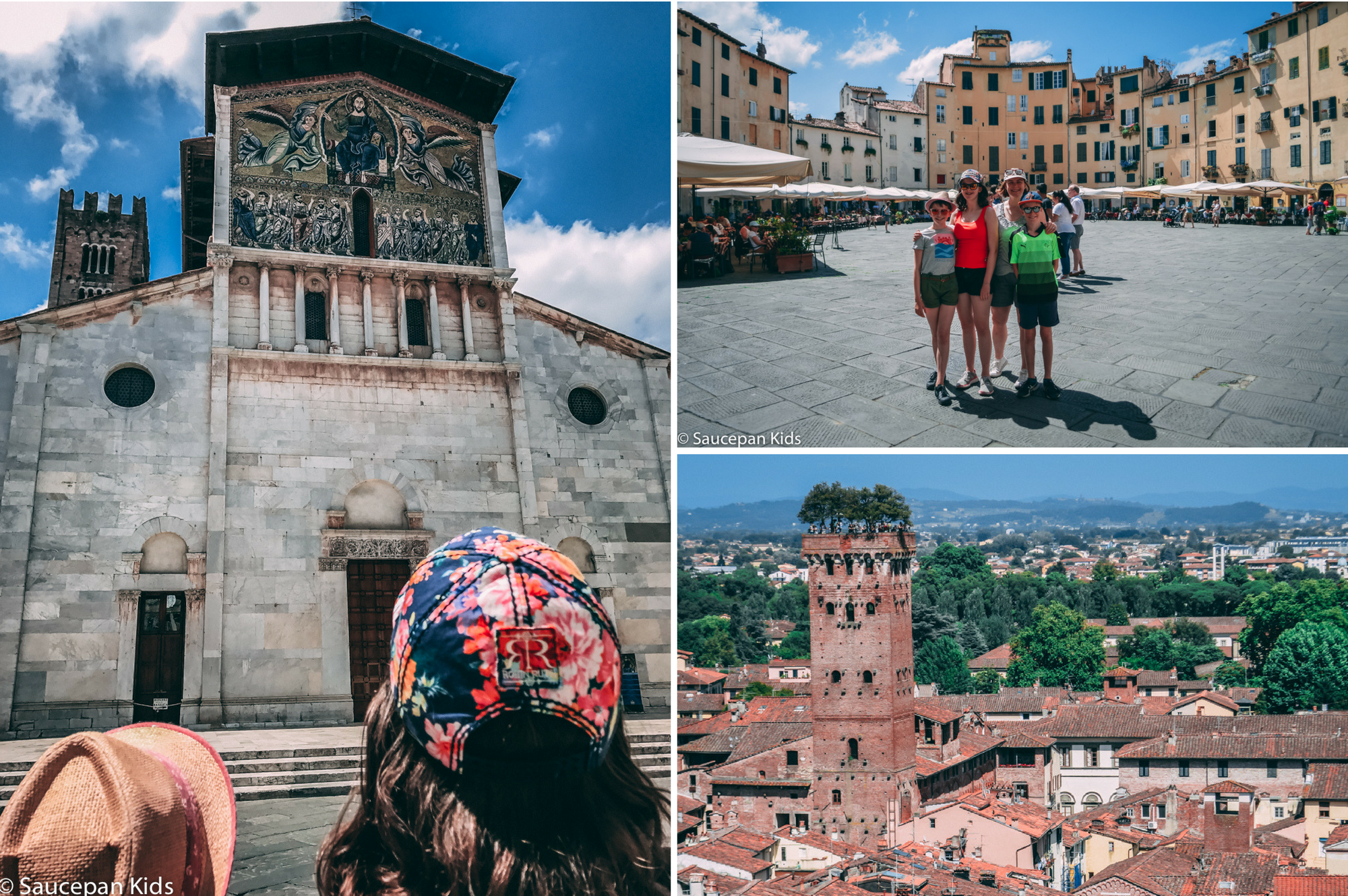 We enjoyed a pizza lunch just outside the famous Piazza which was quite affordable even though I had forgotten about the cover charge that is added per person to the bill.

After fueling, we headed to Torre Guinigi, the famous 14th century tower with the trees growing out the top. We climbed the 230 steps and were presented with a stunning view of the city. However we then walked over to the botanical gardens and climbed the clock tower? Which gave us a much better view which included the famous Torre Guinigi. You could buy a combination ticket for Torre del-Ore and Orto Botanico for €9 adult and €6 kids. We felt that this was great value as the view was stunning.

As we returned from our Siena day trip, we popped in to this tiny hilltop village in the Gulf of Baratti which was only a few minutes from our camping village, Parc Albatros. There is only one car park which you must pay for but don’t let that put you off as the view from the car park will take your breath away. On a clear day you can see as far away as the island of Elba and even Corsica. In fact, there were people enjoying the view with a picnic on the benches dotted around the car park! 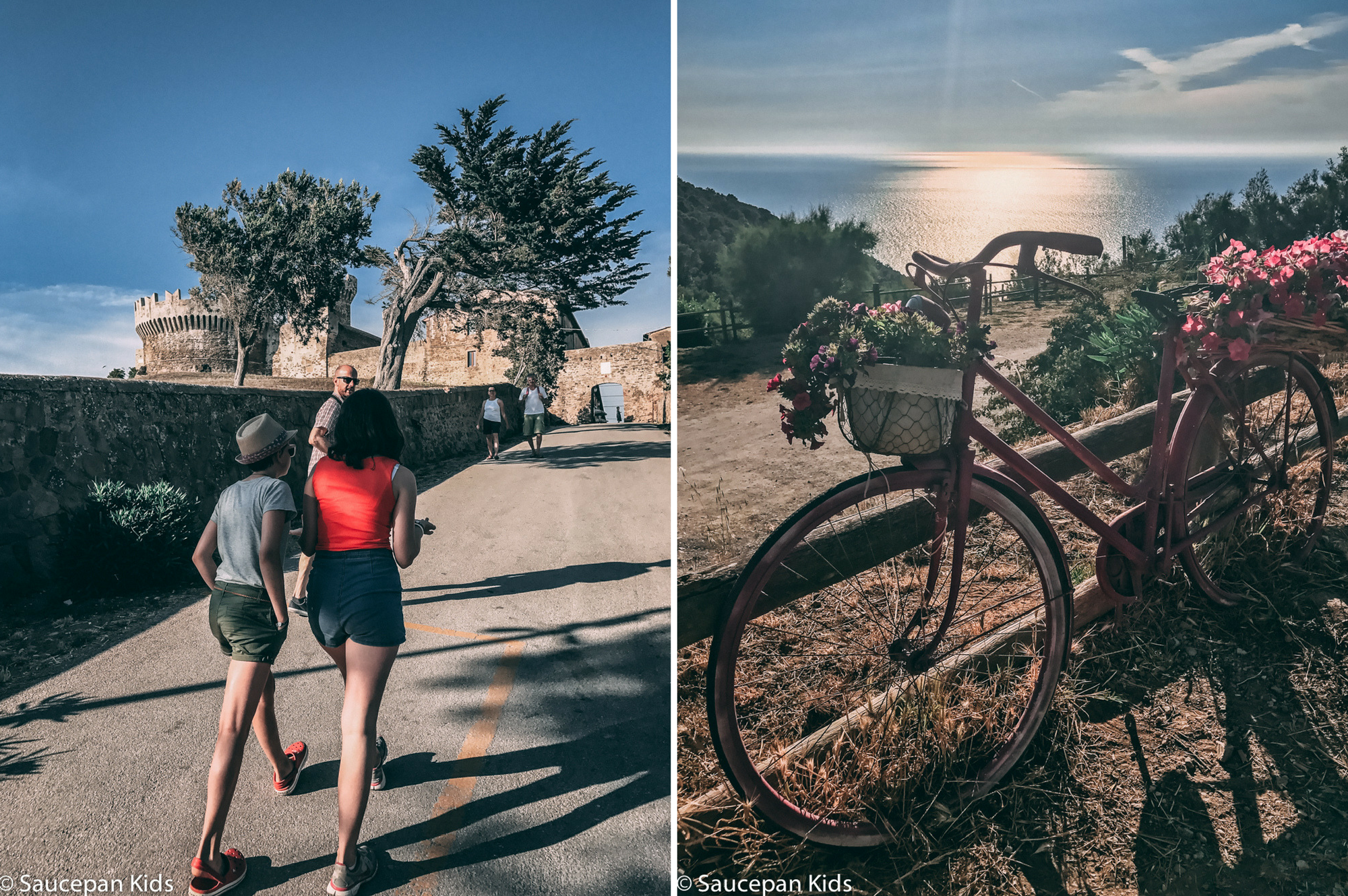 Populonia is famous for it’s hilltop medieval castle which was unfortunately just closing as arrived so we could only wander down the cobbled streets and enjoy the unique boutique shops that lined the street. There were no shops selling inflatable pool toys here, they were all designer clothes and leather shops.

As the evening was drawing in, we were hungry so we looked at the menu of a couple of restaurants.

This restaurant caught our eye in the quaint village of Populonia as it stated on the special boards that all the fish on the menu (only fish) had zeros miles, in other words the fish had all been caught locally. The owner offered us a lovely table outside and then proceeded to explain the menu to us and once he realized that we were from Ireland, he then chatted with us about his time working in London in the seventies and having an Irish girlfriend from Monaghan.

He originally owned a restaurant in Rome for 30 years before retiring with his wife to Populonia. They had just opened this osteria one year ago and they were both really enjoying their new life here in Tuscany. He wife cooks and he is the host. We were really taken with his passion for what he does and for good quality Italian food.

James and I had the set menu which cost only €20 each and it included a glass of delicious white wine. The kids ordered fresh fish and pasta and said it was the best they’d ever tasted. 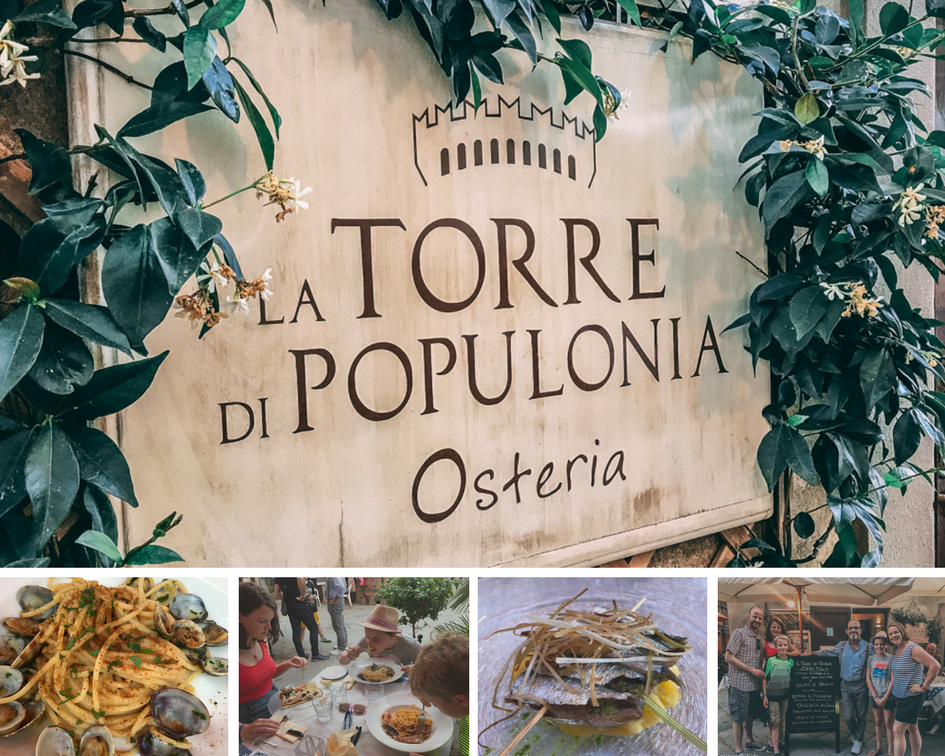 He brought out some warm home cooked bread and some extra virgin olive oil which was produced locally by a friend of his. We were so taken with the olive oil, we looked up the website and go in touch with them and organised a visit to the Tenuta Poggiorosso estate to find out more about the wine and oil that they produced. 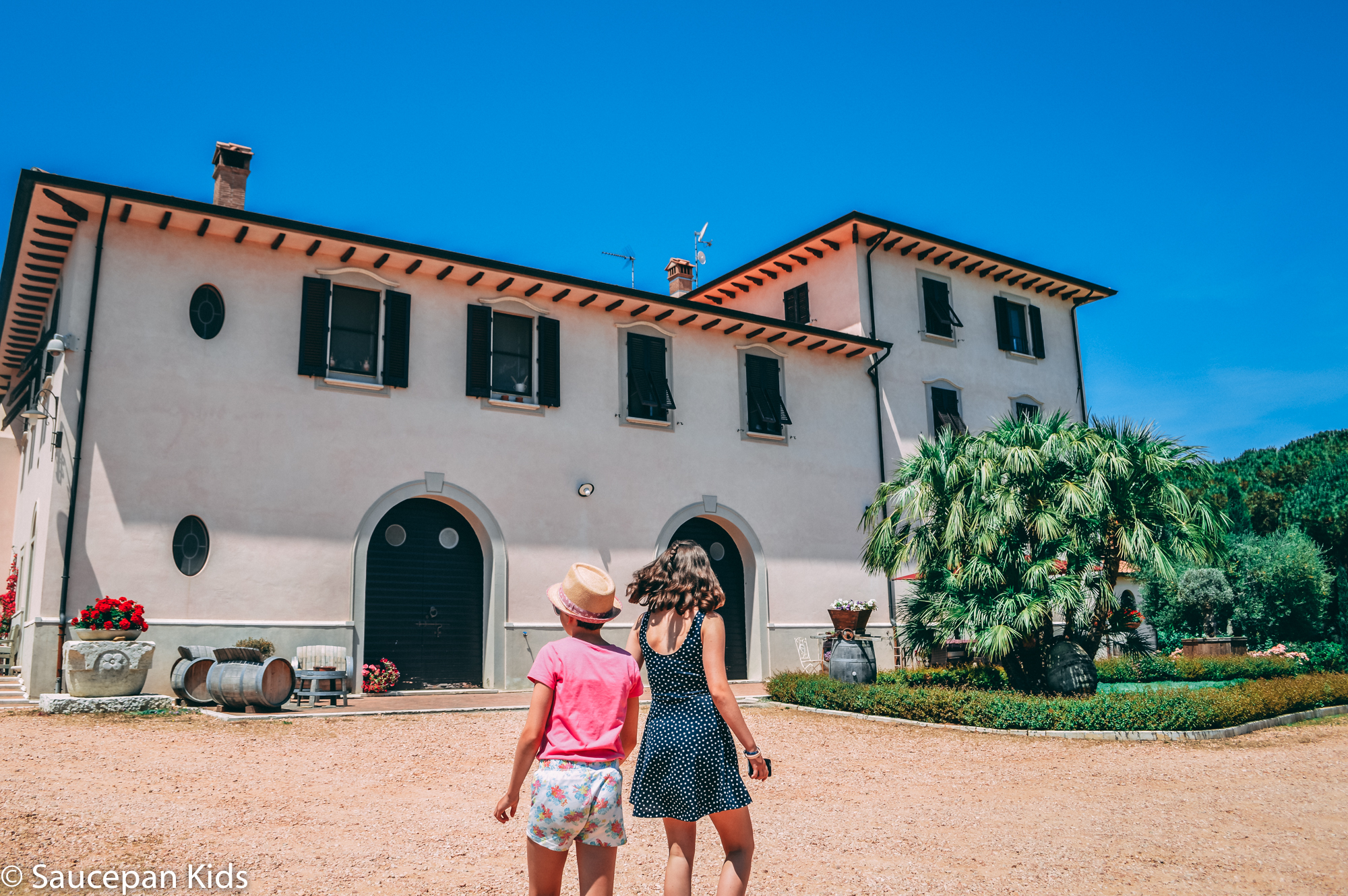 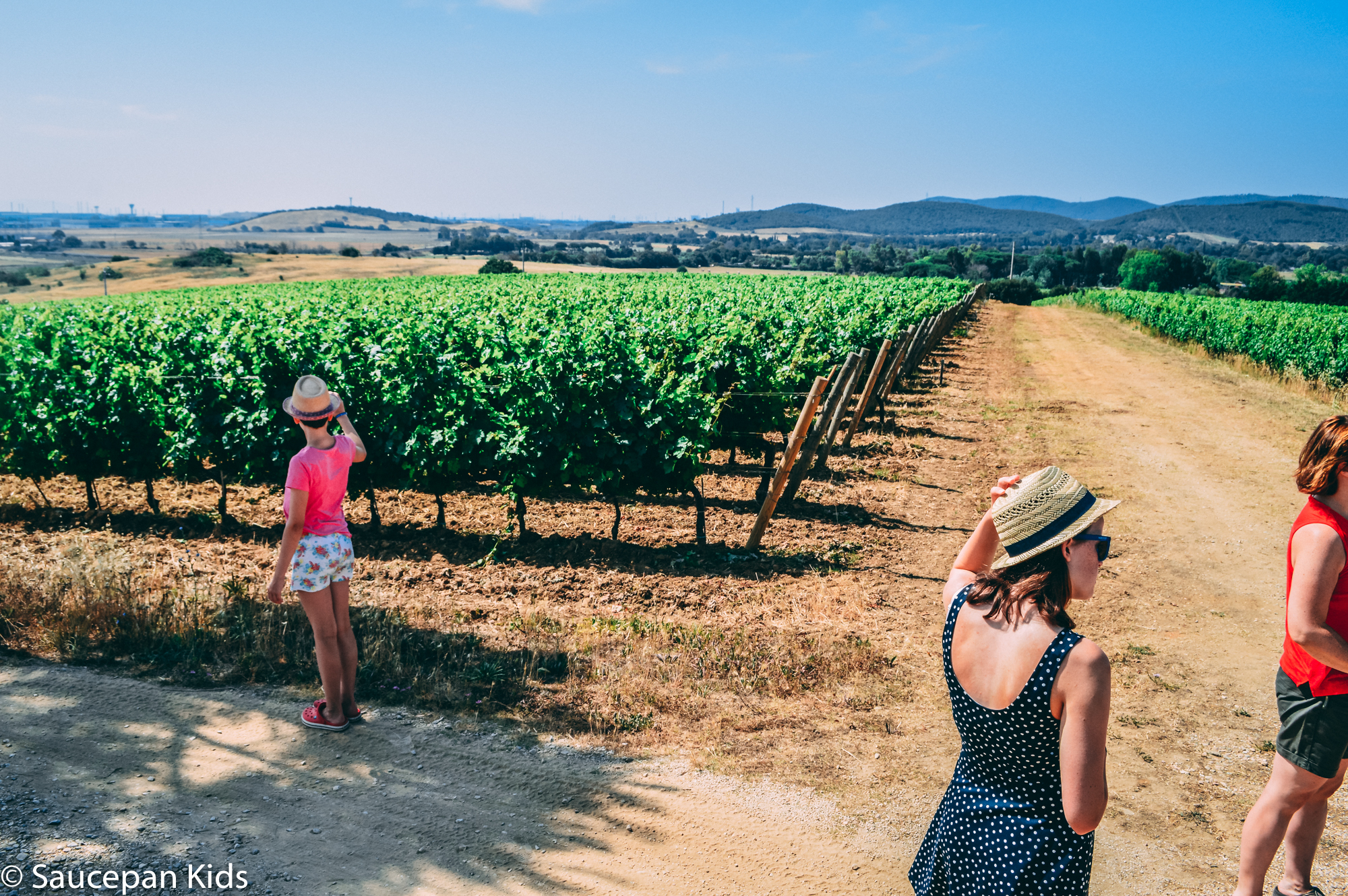 We were so impressed with our visit to the estate, we even ordered a few boxes of their wine and olive oil and had it delivered to us at home in Ireland, even though it was a hefty delivery charge!

There are just some of our suggestions for family days out in Tuscany. It’s a huge region in Italy just waiting to be explored so why not consider it as a possible holiday destination for your next family holiday.

Have you been to Tuscany? Where would you suggest visiting?