There is nothing like being able to go out into the garden and get fresh leaves for salads. We’ve managed to get our first salad leaves in the raised beds and are now impatiently waiting for them to grow.

It is not necessary to have raised beds to plant out salads so you don’t have to have a big garden to enjoy growing them, the convenience of popping into the garden to pick them and also the variety and taste that is so much better than shop bought! In the past we have used normal plant pots and even those large plastic containers you get to hold kids toys in – just make a few holes in the bottom to allow for drainage. I plan to do some of these later in the year so will write about it then.

We bought these salads as seedling plug plants from The Organic Centre at the Sligo Farmers’ market which is held every Saturday morning in the car park of Sligo IT. They had a very tempting display and I just couldn’t resist buying them. We actually bought them a couple of weeks ago when the weather was lovely but the forecast predicted frosts and even snow so held off planting them until now. 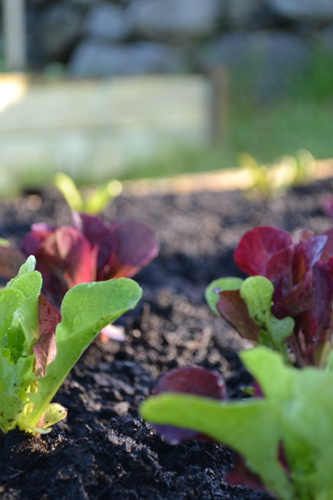 It was incredibly easy to do and the kids and I got all of them planted in just a few minutes. They took up just less than one of the our four raised beds so to finish off the bed we also sowed out a row of beetroot and a row of radish seeds. Even though one of the trays of plug plants was beetroot, we thought we’d sow some from seeds to keep a supply coming once the plugs had finished.

The beetroot was labelled but the two trays of salads came without labels so it is down to my limited knowledge to identify what they are. There appears to be some cut and come again leaves, rocket, a wild rocket and some other oriental leaves. I will do some research and update!

So now all that remains is to wait for them to grow, regular inspections for slugs and caterpillars and watering them every now and again if the rain ever decides to hold off!

Have you planted out any salads yet this year? If so what have you gone for? If not, it’s easy so go and do it now!