What has gone wrong with our daily bread?

I’ve known for a long time that the majority of the packaged sliced bread that you buy from the supermarket, especially the white variety, is not good for you but it took an episode of River Cottage to ignite my passion for real bread. In the episode, Hugh Fearnley Whittingstall explained exactly what goes into a supermarket sliced load and then showed exactly how easy it is to make your own real bread.

After this awakening I was determined to find out more about bread, how to make it and try and pass on my interest to the kids.

Where did it all go wrong for our bread? 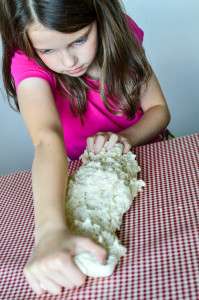 1961. This was the year the British invention, the Chorleywood bread process (named after the village in Hertfordshire where the company was based) was introduced, sounding the death knell for real bread around the world. Sadly, 80% of the bread we buy, including the allegedly ‘healthy’ loaves, is made using this process.

The Chorleywood bread process epitomises everything that is wrong with mass produced, commercial food. It robs bread of one of its most important ingredients – time. Time is crucial in bread making, allowing the dough to rise slowly and ferment adds greatly to the texture and flavour of the finished product. Shortening the time will, therefore, give you a flavourless imitation of the real thing.

The high speed mechanical mixing process of the Chorleywood method allows fermentation time to be greatly reduced. The implication of this is that cheaper, lower-protein wheats can be used, which means that manufacturers (I can’t bring myself to call them bakers) can produce high volumes, with low effort for a low cost. We, the consumer, are the losers in this race for efficiency.

Anti-fungal agents, chemical improvers and hydrogenated fats are all added as part of the process. This and the short fermentation times, that make wheat harder to digest (there is a belief that this process has been responsible for the increase in wheat and gluten intolerance) combine to make this type of bread particularly unhealthy.

Also, how on earth can a loaf of bread be able to be eaten a week after buying it? Considering it had to be transported from manufacturer to shop and then sit on the shelves for some time, this certainly can’t be right.

So what can we do about it? 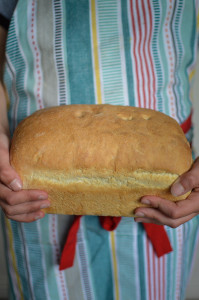 The first option is to find a local baker who bakes real, fresh bread.

This should be approached with caution though as a lot of the supermarkets and chains of bakers who claim to bake fresh bread still use low quality flour and add preservatives, fats and sugar. Even though they appear to bake it in-store, they are often merely finishing the process and it really is not much better than the bread produced by the Chorleywood method. sexlocals.com.

Your best bet is to find an independent baker and chat to them about what goes into their bread. Of course this is a more expensive option but then it should be, you are buying a quality product, that has taken time and skill to produce with good ingredients. 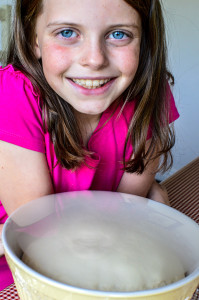 We have totally embraced baking our own bread. It is cheaper and healthier than buying supermarket bread, and most importantly, it tastes so much better – the difference is immeasurable.

You can, and really should, use high quality, organic flour and still make a loaf cheaper than a sliced pan. Not only is it cheaper but also using flour that hasn’t been overly processed and treated is much healthier.

You control how much sugar and salt is added and there’s no need for preservatives and E numbers.

I’m not going to say it’s plain sailing and easy though. Some Irish soda bread recipes are very straight forward, however even the basic yeast breads and especially sourdoughs can prove a right handful. Mistakes are often made but it’s all about practicing, not giving up and enjoying and learning the process.

Get the kids baking real bread 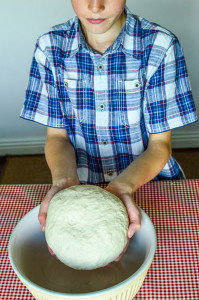 It is also a great thing to get the kids involved in. They love measuring out ingredients, kneading, watching the dough rise and prove and I’ve often caught them sat on a stool watching the bread bake in the oven.

It’s a great life lesson for them, understanding what real food is all about, learning patience and essential skills.

We’ve got a number of recipes here on Saucepan Kids that I’ve linked to below and over the coming weeks and months we’ll add more, along with lots of further information about how to bake your own great bread.

Let us know about your experiences and share them with our readers.

It’s just left for me to say that baking your own bread is extremely satisfying and rewarding and you may well become addicted – don’t say I didn’t warn you.

Here are some bread recipes, we’ll add more here when we publish them.

Make your own butter – not a bread recipe but something to put on it!