We were incredibly lucky to be invited by Jamie Oliver’s Irish business partner to visit their restaurant, Jamie’s Italian, in Dundrum, to have a pasta masterclass with their chefs. Even though Jamie obviously wasn’t going to be there, it was an amazing privilege because he was a major inspiration for us to start this blog after watching his TED talk about teaching every child about food and fighting obesity.

So early one Sunday morning we made our way to the restaurant where they invited us in two hours before opening. We were welcomed by Ronan, the duty manager, who introduced us to Kyle, one of the chefs and our teacher for the morning. 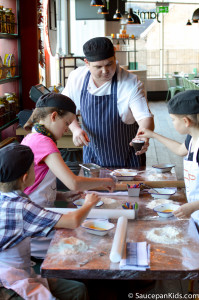 They had laid out some tables at the back of the restaurant which they’d rather ingeniously covered with cling film to make it much easier to tidy up later.

First we made tagliatelle. We’d made pasta a few times at home so it was good to see that we were doing some things right but we learned absolutely loads as the guys taught us how to mix, roll out and cut the pasta with really helpful tips along the way.

With the tagliatelle done we moved onto ravioli, something we had not tried at home yet, making one of their most popular dishes, Pumpkin Panzerotti. The pasta was prepared as was the pumpkin filling but Kyle explained how to make it all. 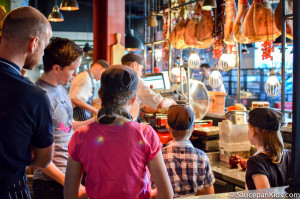 We were then taken on a tour of the restaurant seeing where they make their fresh pasta every day (up to 60kg!), the cold meat preparation and then we went to the front of house preparation area where Kyle showed us how to make the sauce for our ravioli.

Along the way we were introduced to lots of the chefs and waiting team including head chef Nick. Ronan and Kyle took great delight in telling us about a video where Nick demonstrates how to make the pumpkin sauce – a must watch though Nick might not agree!

I’ve always felt a bit dubious about chain restaurants, they often seem formulaic and lacking in passion for their cooking and ingredients. Jamie’s Italian couldn’t be further from this.

Everyone we met was enthusiastic about their job and their passion for cooking and the very best ingredients was infectious. 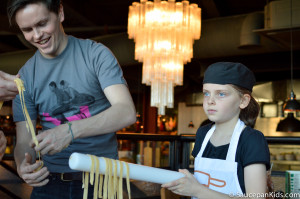 Ronan’s knowledge of their processes and ingredients was amazing. He told us all about the Michelin grade Acquerello risotto which is matured for 2 years and the different types of ham, one which was a particular shape because it was sent off with Italian soldiers in World War II who used them as pillows.

They were also really interested in what we are doing with Saucepan Kids, Ronan had even gone as far as cooking the sausage and apple sandwich on our site.

All in all we all had a fantastic day, especially the kids who came away really excited about what they had done and dying to get home and cook more pasta and try more recipes.

Aside from the cooking it was amazing for the kids (and us) to be behind the scenes, seeing a busy restaurant preparing for a service including the set-up, waiter’s meeting and chef’s breakfast. We had no idea that chefs worked through the night to prepare food for the next day – the lamb that had been cooking for 16 hours sounded amazing – we will try that next time.

It just remains to say thank you so much to Ronan, Kyle and the rest of the team for taking time out of their busy day to look after us so well and to Gerry, Jamie’s Irish business partner, for arranging the visit.

If you do get chance to eat at Jamie’s Italian I highly recommend you do and remember the fantastic work and dedication that goes into preparing your meal.

Check out the images below for all of the pictures from our day – click on a picture to see it full size.