On a chilly Saturday morning I arrived at the Miele Gallery in CityWest Dublin 24 to learn all about Japanese food with cookbook author Fiona Uyema.

After a quick nosy around the kitchen showroom and a much welcomed coffee and pastry, 16 eager participants made their way into the performance space where we met Fiona and her husband Gilmar. 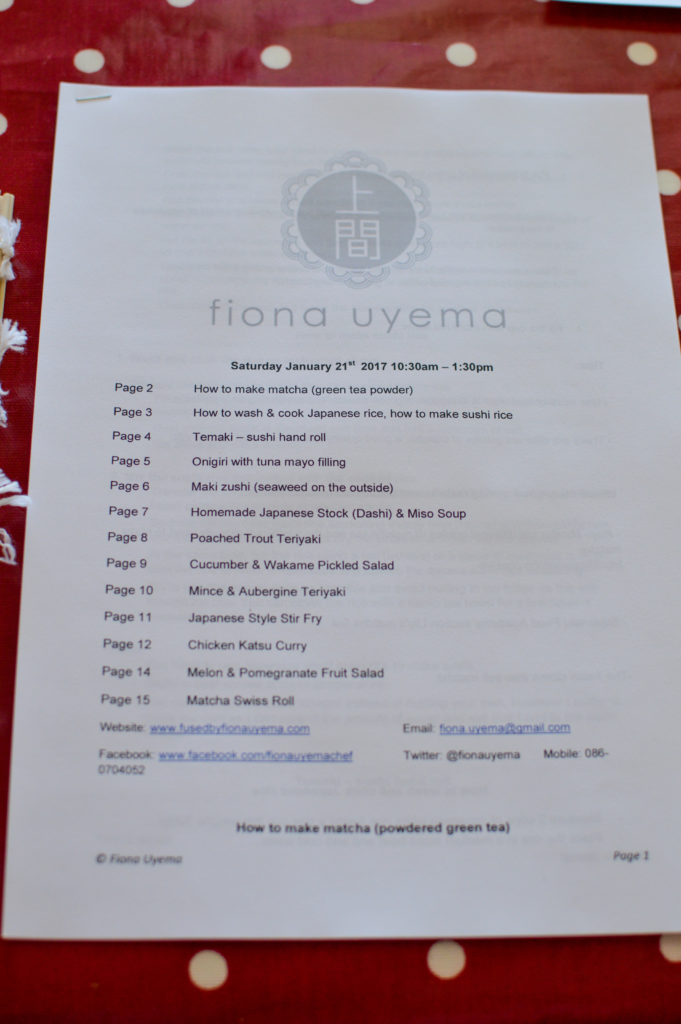 Looking at the plan for the cooking class, it was hard to believe that we would be able to achieve everything in the three hours. 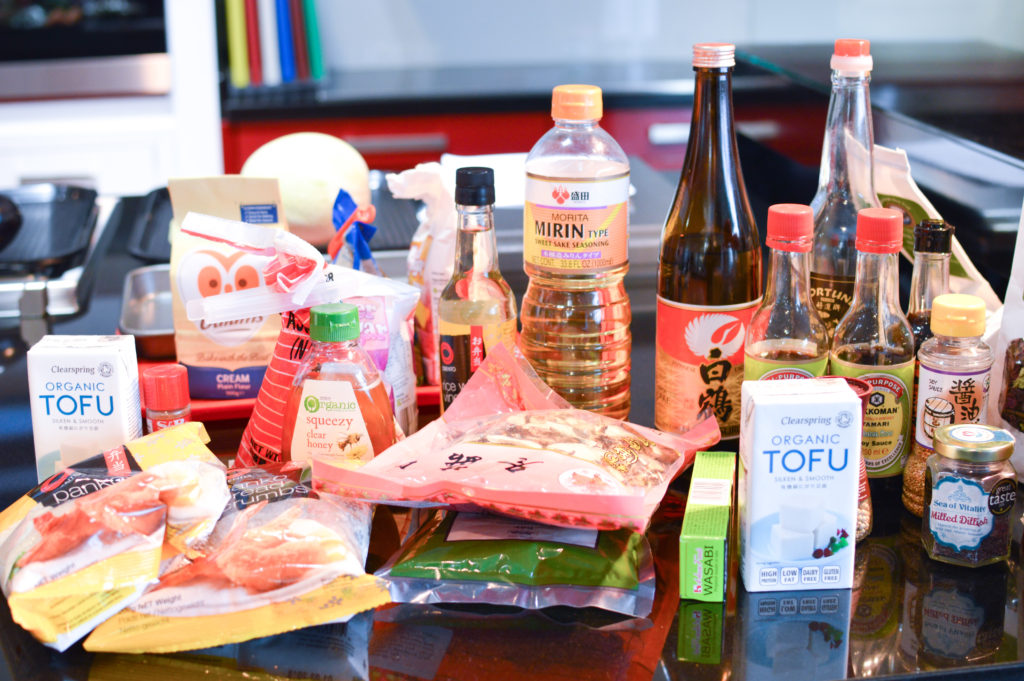 Fiona began the cooking class telling us how she became interested in Japanese food having studied international marketing and Japanese and living in Japan for three years. It was there that she met her (now) husband who was born in Brazil to Japanese parents. It was during her time in Japan where she lived with a Japanese family in Takasaki that she became fully immersed in learning about Japanese cooking.

The Japanese diet is one of the healthiest in the world, it’s low in fat and high in protein and contains many foods high in antioxidants so I was very keen to learn more about it and bring it back to the Saucepan Kids. 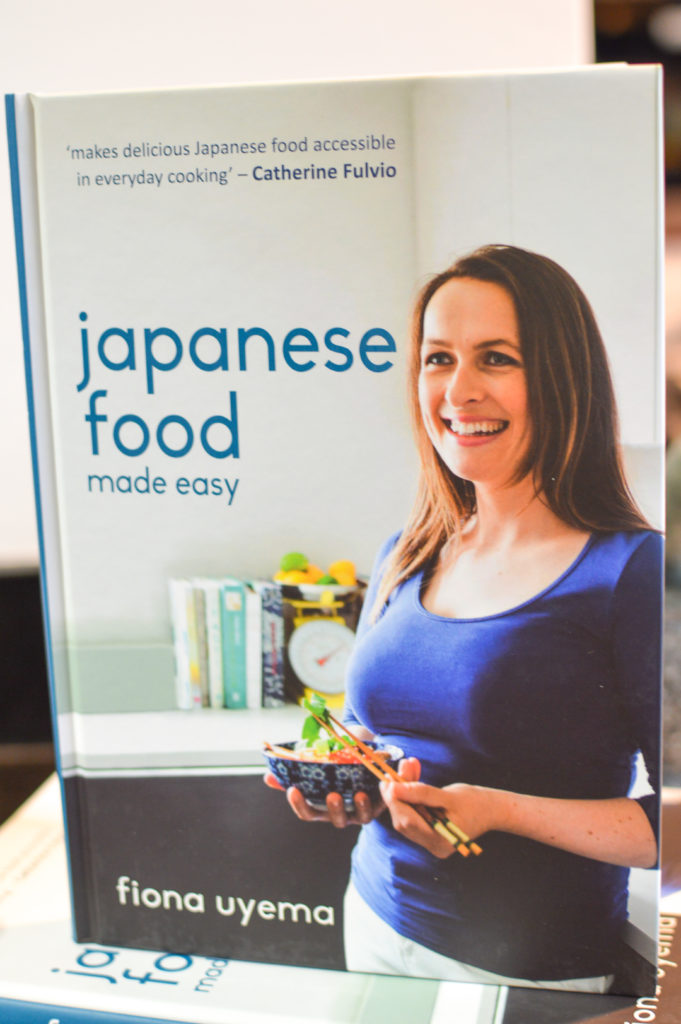 In her cookbook, Fiona explains how, a few years after she returned to Ireland she was diagnosed with ovarian cancer and she turned to the Japanese diet for comfort and also to help her return to health. After successful chemo treatment, Fiona made a full recovery and began documenting her passion and appreciation for Japanese food through her blog. She also began teaching Japanese cookery classes.

Japanese cooking is not just about sushi

To kick things off Fiona told us about the different types of ingredients that are used in Japanese cooking and how there is so much more to Japanese food than just sushi.

I was surprised to find out that most of the ingredients we were introduced to are readily available in our local Supervalu stores. 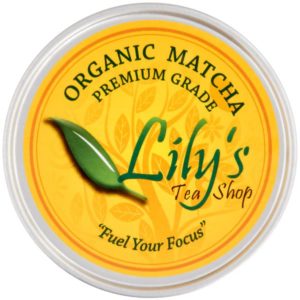 With the introductions complete, Fiona told us all about how to make matcha. Matcha is a green tea that is rich in antioxidants called polyphenols and has been linked to providing protection against heart disease and cancer as well as blood pressure reduction.

It’s incredibly concentrated and you only need a quarter teaspoon of this popular green tea powder which you should ideally whisk with a bamboo brush until it froths. Fiona told us that we should always buy high quality organic matcha and although it’s expensive it lasts a long time. 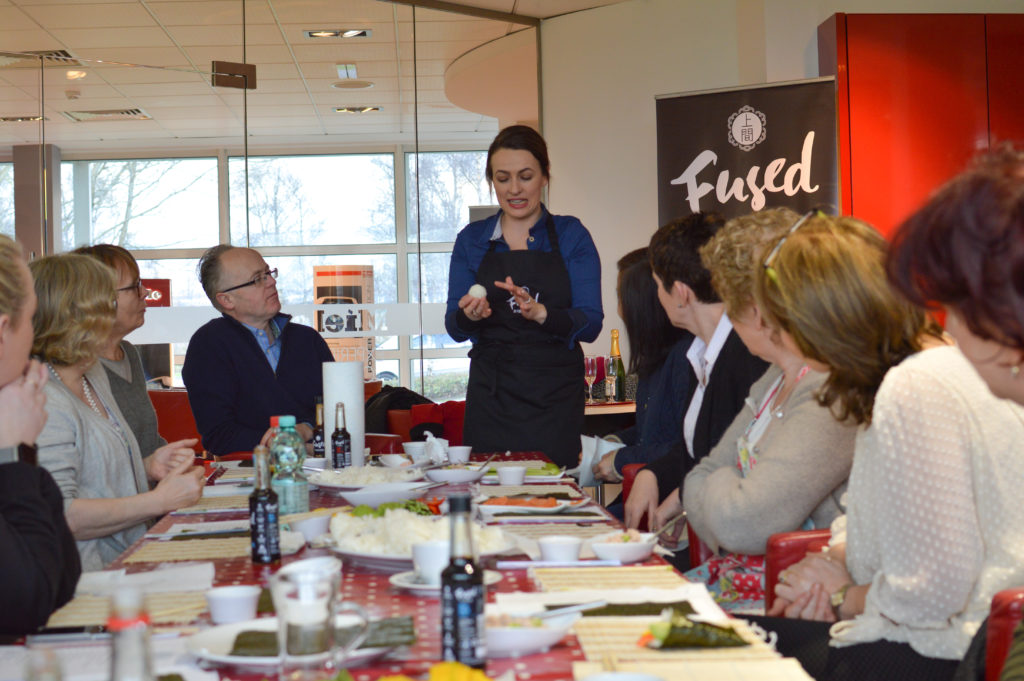 We were then introduced to sushi and how best to cook Japanese rice. We were shown how to create a sushi vinegar and then assemble our temaki (sushi hand roll) and maki sushi. 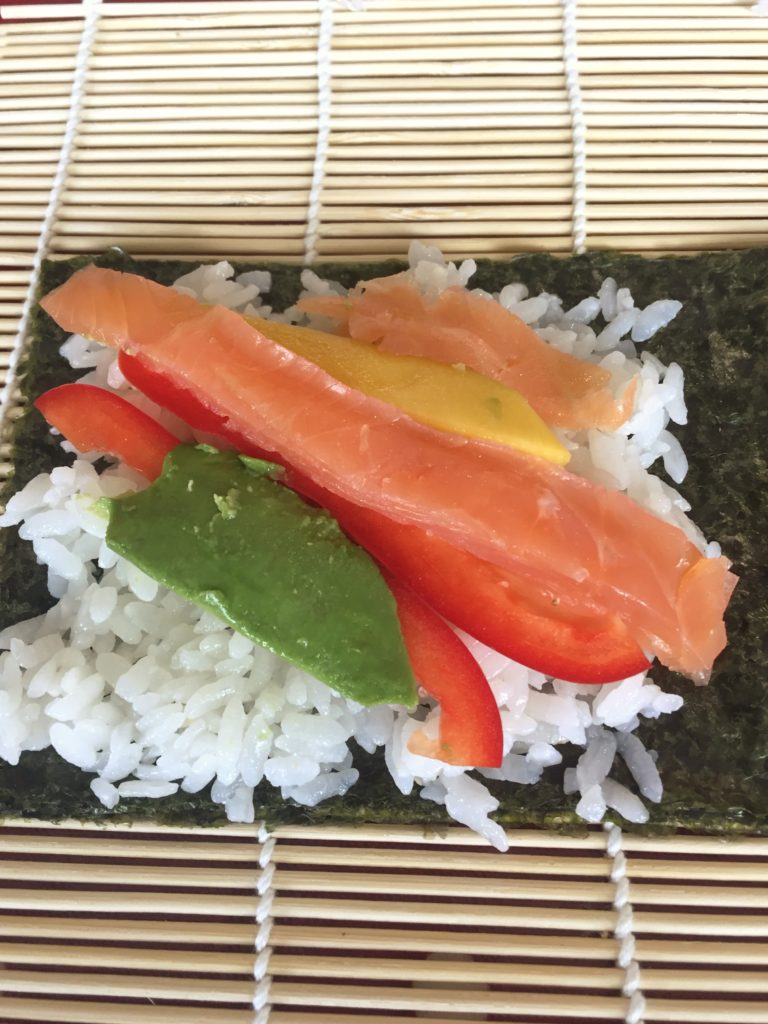 I have tried making maki sushi before however hadn’t considered using mango and avocado which were a combination to die for. 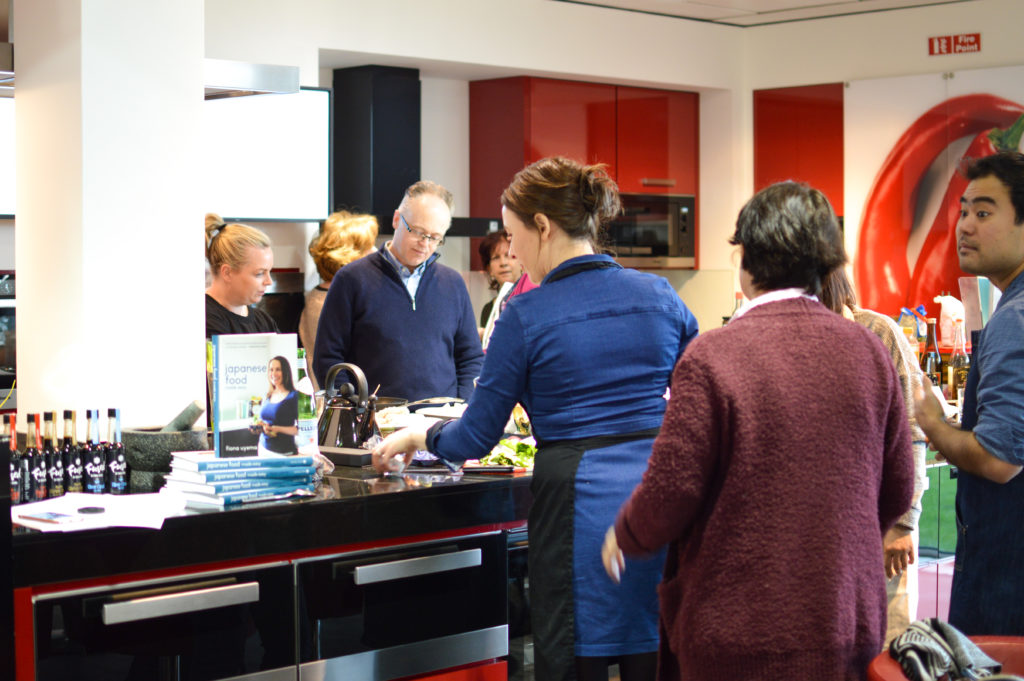 Another easy sushi to make is onigiri which we made with a tuna mayo filling. This is something that the kids would love to help make. Onigiri is a lovely alternative to sandwiches and will be definitely be making a regular appearance on the Saucepan Kids packed lunch menu.

I loved the fact that everyone around the table got the opportunity to making their own temaki, onigiri and maki sushi and then enjoy them. 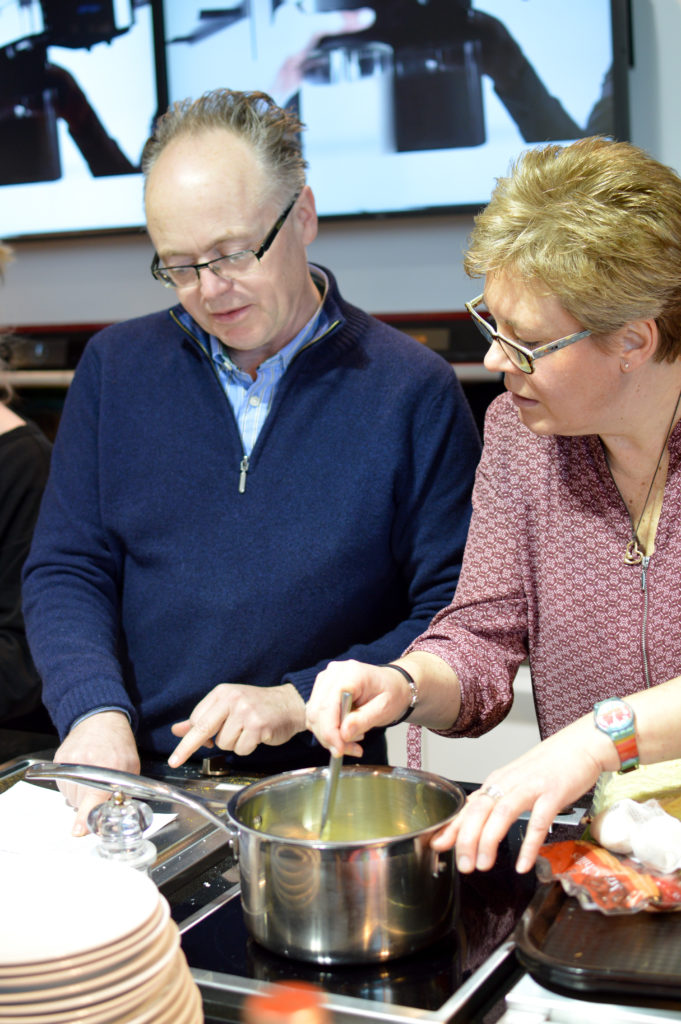 We were then split into four groups and assigned two dishes to prepare in the kitchen with Fiona and Gilmar’s help. Later we would then sit down and enjoy all the dishes together.

I was in the group who were tasked with creating the Japanese style stir fry and the matcha swiss roll. We had step by step instructions and all ingredients and necessary equipment were ready for us.

It was fascinating watching the hustle and bustle of 16 people cooking. The smells and the sounds as the dishes took shape were intoxicating. We regularly popped around to visit the other groups to see how their dishes were going and what they were doing for future reference.

At the end, we all sat down and enjoyed the incredible Japanese food that we had all lovingly prepared. I have to say that my favourites were the dashi (homemade Japanese stock) which was used to make miso soup. I also loved the fiery chicken katsu curry and the light cucumber and wakame pickled salad. 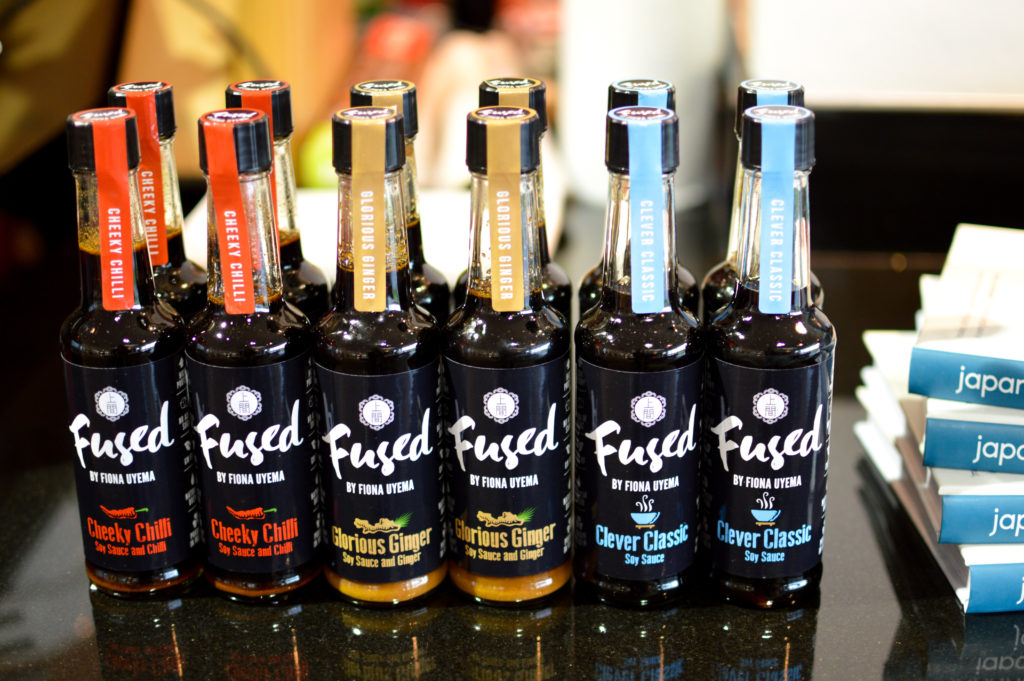 Fused by Fiona Uyema is Fiona’s range of flavoured soy sauces which are available now at your local Supervalu store. I personally loved the ‘Cheeky Chilli’ one and the ‘Glorious Ginger’ one, both of which would add another level of favour to any Japanese dish at home. 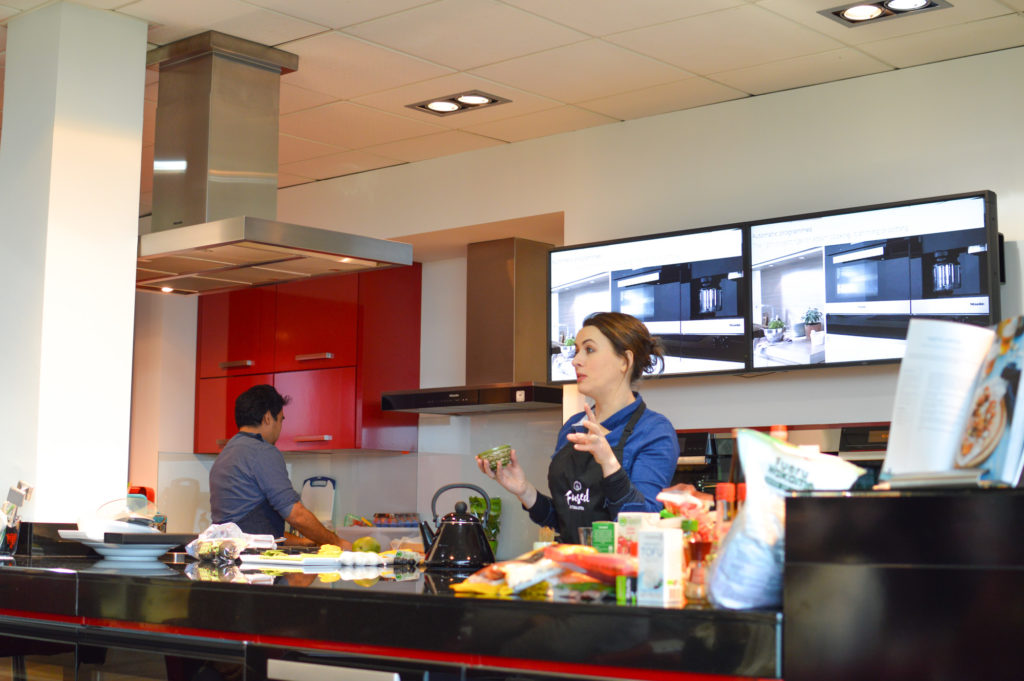 The course is priced at €65 lasting three hours and includes a full meal at the end. It’s great value and I would recommend this course to anyone who is interested in knowing more about Japanese food.

I learned so much from Fiona and am excited to include more Japanese cooking at home. The next course is scheduled for March 25th and there are still some spaces available. You can book your place on her website here. You can also buy Fiona’s cookbook (€17) and soy sauces (€2.99 each) on her website.

Disclaimer : I was offered this place on Fiona Uyema’s ‘Japanese hands-on cooking class’. This review is, as always, 100% honest and my own opinion.